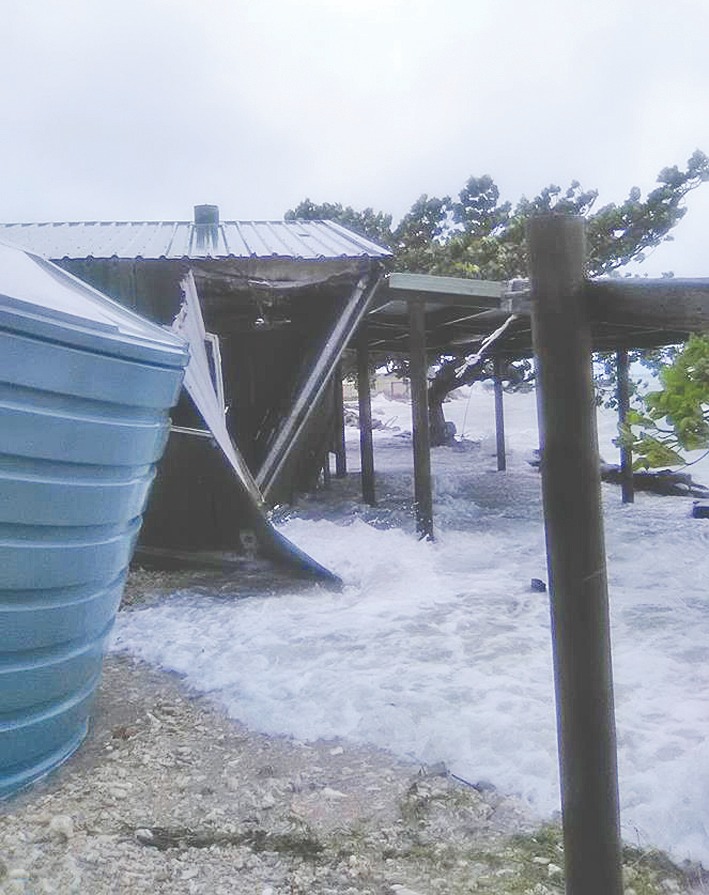 THE Wet season in the Torres Strait started with a vengeance last week, where gale force Westerlies, king tides and driving rains have resulted in coastal inundation on many island communities, boats snapping off moorings and boat travel impossible.

The wild weather was the same destructive thunderstorm cells that ravaged the Northern Territory which brought record rainfalls and gale force winds that left over 4,500 houses in Darwin without power.

Acting Sargent Chris Uprichard from Thursday Island Water Police said despite the rough conditions there had been no search and rescues conducted, “It seems people are adhering to the warnings which is good,” he said.

However on Sunday January 27, Torres Magic, one of the Peddells catamarans that provides the ferry service to the NPA snapped its mooring.

Business owner Matt Connor said: “It was half inch chain and must have bent a link under the strain until it snapped.”

Luckily it was spotted by someone drifting across the harbour who raised the alarm.

Mr Connor and his crew managed to reach the vessel, shortly before the water police arrived on the scene.

“Luckily for us the tide was going the opposite direction to the wind which slowed it down, it could have been a lot worse, especially if it hit the old Caltex pylon,” Mr Connor said.

Also a fishing trawler snapped its mooring near Sadies Beach on Thursday Island and washed ashore on Horn Island.

It was too rough for MacDonalds ferry, Australia First, to run as the winds and high tides would have made docking at Horn Island perilous, instead the smaller water taxi had to tackle the conditions.
Torres Pilots had to suspend pilotage services for most of January 30 and 31, as a spokesperson told Torres News: “There was two to three metre swells and winds up to 45 knots.”

Australian Reef Pilots Thursday Island Manager Andrew Bayne declined to comment on whether or not their services were cancelled in the extreme weather conditions.

Most Torres strait Island communities were adversely affected by the combination of high winds, a low pressure system and the king tides, which were extra high due to a 'Super Moon' falling on January 31, a rare red and blue moon. It represents the highest tides for 2018 and tides will not be this high until December 2020.

TSIRC Councillor for Saibai Keri Akiba said that the new seawall was holding up well, but high winds saw some waves splash over the top.

Supervisor Ranger on Saibai, Conwell Tabuai, who was monitoring the king tide said: “The wall is holding, its just the backlash of the waves coming over the top due to the high winds that were around 25-35 knots.”

Mr Tabuai said while there was water on the road, the seawall was preventing the tide inundating the community.

The residents on Iama were not so lucky where houses were flooded by the incoming high tides and strong winds.