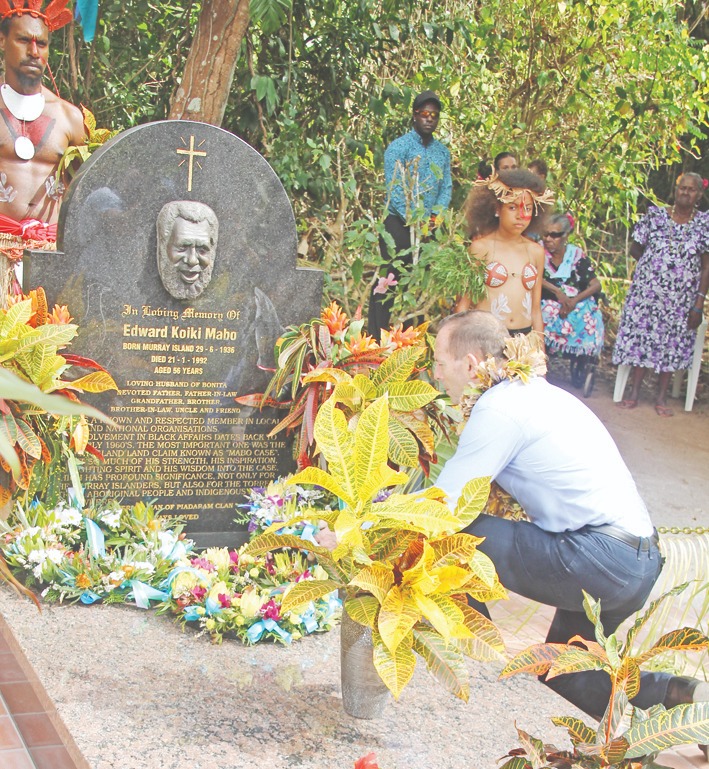 PM’s visit, a noble gesture but what results?

THE first Prime Minister to visit the birthplace of Native Title stood on the beach on Mer last week, near where Justice Moynihan, who held hearings for Mabo Case on the island, planted a coconut tree with Traditional Owners in 1986.

Despite the fact Mr Abbott was very critical of the High Court decision on Mabo at the time, it still seemed like the perfect place for him to announce plans or policy to help close the widening gap or strengthen the road to reconciliation and recognition,

especially after he had just laid a wreath on Eddie Koiki Mabo's grave.

But none were made. In fact no announcements of policy were made during his entire week spent in the Torres Strait and NPA.

However while on that beach, Mr Abbott did compare himself to Former US President Richard Nixon and how he pulled down barriers between the US and China in 1972, as an analogy for breaking down the racial barriers with first Australians.

"Just as Nixon went to China... it may well take a conservative leader to bring about the ultimate form of symbolic reconciliation," Mr Abbott said.

An unusual choice of analogy for an embattled Prime Minister with plummeting polls and a decisive by-election looming. Especially after the recent 'Choppergate' scandal that saw Speaker Bronwyn Bishop's resignation, considering that was a wordplay on Watergate, the scandal that brought down President Nixon.

There is no doubt however that the Prime Minister's historic visit to Mer was a noble gesture, and was appreciated by the island community that were buzzing with excitement for weeks prior.

Gail Mabo said: "This was very significant. He is the first Prime Minister to actually come out here and pay his respects to my father, which is remarkable that he's taken time out as no one comes out here. For him to come and see the community we can highlight

the importance of community consultation to bring about constitutional change."

Mr Abbott described the process of constitutional recognition as a "long term national project. John Howard kicked it off in 1999 when he wanted to put a preamble in our constitution."

He described the current push as bipartisan policy we "have to get right" with a referendum council, which he hopes will be announced in a couple of weeks.

He said he hopes the the practical outcome is that Indigenous people will be "living prouder," correcting a "regrettable over sight," when the constitution was first formed.

Hopefully the push the from Western Australian LNP to drop the referendum at the next election for it being in the too hard basket, as well as growing dissent from his back bench on the subject, or the possibility of a marriage equality plebiscite, doesn't

muddy the waters on the the importance of this big issue getting across the line, and saving the nation from continued international embarrassment.
Community joins together for visit At a community level, everyone mucked in on Mer to help prepare for the PM’s visit, from kids to Elders, even Torres News who arrived the day before was cutting palms in the jungle with Tagai Primary School Principal John Case and TSRA Chair for Mer Aven Noah.

The work continued until past 11:30 the night before and started again 5am the morning of the PM’s arrival.
One Mer resident, Kay Marou, who was up early with a leaf blower said: “It’s a lot of work for a three hour visit, but its all good, this is a once in a lifetime opportunity.”
Another resident, Terrence Lloyd Maza said there were “...a fair few things the Prime Minister should know, but I don’t think there will enough time, it’s very expensive in this part of the country to live, I hope he understands that.”
Former PBC Chair Doug Passi said: “The Prime Minister has to know that when he passed through the shark teeth at the airport entrance that he was leaving Commonwealth and State Law and entering our Lore, we, like the Commonwealth, have our own
systems of justice.”
When the Prime Minister visited the school he acknowledged the fact that the attendance rate of 90 per cent was above the national average, but went on to say: “...not many of those kids would expect to go on to become doctors or lawyers.”
While the Prime Minister declined to answer questions concerning the high price of living in remote communities he did comment to Mer resident Melora Noah in the Ibis supermarket that it was one of the things they had to accept living there.
One has to wonder the cost of this noble gesture, the millions of dollars spent on essentially a media campaign of where there was little time to govern or really drill down into the underlying issues of the region.
The cynic may say it smells like an election, the optimist a sign of true recognition for First Australians.
The 100’s of extra personnel, months of planning, dedication of military assets all must have cost a fortune.
The three Blackhawk helicopters parked at Horn Island Airport, with a running cost of around $12,000 an hour each, where the Townsville base is over six hours away alone creates a dizzying set of numbers.
Maybe if Mr Abbott is the Prime Minister next year he could choose an Indigenous community, ask for leaders and community groups
to provide a detailed report of the their aspirations and needs and then pledge not to visit, but instead spend the money where
it is actually needed.