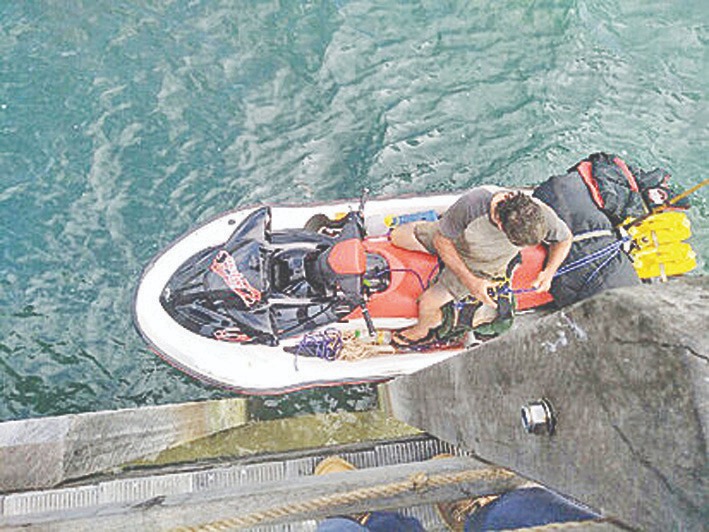 A MAN trying to flee the country through the Torres Strait to PNG on a jetski was apprehended on Saibai this week, in what police and community leaders say would not have happened without the support of local people throughout the region.

Queensland Police Patrol Inspector Mark Lingwood said the man left Bamaga on Monday morning, March 25, on a jet ski but was arrested on Saibai that evening.

“From information from locals they alerted the police, and, from working with the community, Border Force, TSRA Rangers and our TSIPSOs, we were able to make an arrest that night on Saibai Island,” Insp Lingwood said.

“He's appeared before the court and is being held in remand in Cairns with extradition proceedings being commenced by Western Australian Police, so he will be returned to Western Australia.”

“Everyone put in and worked to keep the community safe,” Insp. Lingwood said.

Saibai TSRIC Cr Keri Akiba said he was not aware of the details of the arrest, but that local Torres Strait Support Officers were involved.

TSIRC Mayor Fred Gela said: “The success of this has come around as a direct result from local people dealing with it, you’ve got TSIPSOs, the local rangers and local people working in ABF movement monitoring.

“If the local content wasn't there or weren't the eyes or ears, the authorities would have unlikely to successfully intervene.

“So the locals being empowered to deal with, monitor and management such a situation has been vitally important in the success of this, without it that jet ski would have been long gone.”

ABF received information from Queensland Police in Bamaga, that a man, possibly armed with a crossbow and carrying additional fuel and supplies, had been seen launching the jet ski at Punsand Bay on Cape York.

It was identified the individual was likely a 57-year-old U.K. national who was subject to an outstanding warrant for drug-related charges in Western Australia.

ABF Northern Command initiated a co-ordinated response with QPS and AFP, with officers from the three agencies deployed to the northern Torres Strait islands by assets from Maritime Border Command (MBC) – a multi-agency task force within the ABF.

ABFC Roebuck Bay, with ABF, AFP and QPS officers on board, located the jet ski and the man on mudflats on the eastern side of Saibai Island.

One of the vessel’s tenders was deployed and the embarked QPS officer detained the individual.

He was taken on board ABFC Roebuck Bay and was transported to Thursday Island where he was held by QPS pending extradition to WA. The jet ski was towed to Saibai island.

“This is a perfect example of local intelligence sharing, community support, ABOC coordination and our maritime capability, all working together to enable a quick and effective multi-agency response to a situation,” Commander Crooks said.

“Through our posture in the Torres Strait and working closely with our AFP and QPS partners, we have the ability to detect a range of border threats, including suspicious movements through the region. Anyone who thinks they can either enter or leave Australia through the region without detection should think again.

“The ABF would like to recognise the efforts of ABF Border Monitoring officers on Moa, Dauan and Saibai, as well as community, council members and councillors on Saibai, Dauan, Sigabadaru and Mabaduan.”

An AFP Spokesperson said the location and arrest of the man was a testament to the AFP’s strong intelligence and policing partnerships.

“This arrest sends a strong message to would-be fugitives – our reach across Australia is second to none and we will use all our contacts and relationships to find you and bring you before a court,” an AFP Spokesperson said.