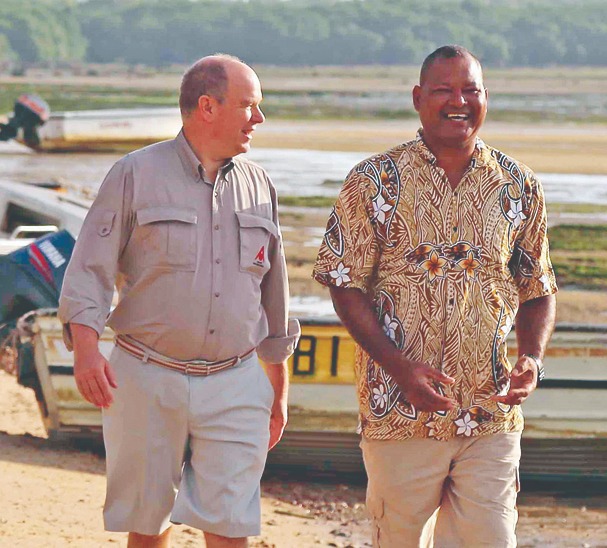 ONE of the world’s foremost climate change advocates, Prince of Monaco, His Serene Highness Prince Albert II, touched down on Badu yesterday in his private jet to meet artist and fellow advocate Alick Tipoti and to see first hand the impacts of climate change in the Torres Strait.

Prince Albert II, known as “The Green Prince” for his efforts to tackle climate change, visited Mr Tipoti and his family on Badu Island as part of a feature documentary film for cinema, Alick and Albert, which will also include the history of the Badulgal people of Badu and the Monégasque people of Monaco.

The men first met at an exhibition in Monaco in April, 2016, where Mr Tipoti was a featured artist at ‘Taba Naba – Australia, Oceania, Arts by Peoples of the Sea’ exhibition, which attracted 600,000 visitors.

The six-month exhibition drew attention to threats facing the oceans.

When Mr Tipoti heard about Prince Albert II’s interest in climate change, he invited the Prince to visit his island home of Badu, where they were already experiencing the effects of rising sea levels during king tides.

Mr Tipoti said the impacts of climate change is something he has experienced in his own campsite, quite literally, where a seawall he built at his camp was washed away in the king tides earlier this year.

“We never thought the tide would ever reach it, but during the last North-West winds it was taken away, so it's really good timing for him to see the effects of what is happening with us, and we're not even as bad as all the Central Islands, they cop it worse,” Mr Tipoti said.

“We feel very privileged to have him over, and who knows what might come out of this.

“I only met him briefly at the exhibition opening in Monaco, but I think the performance we did with our Zugubal dance team made a big impression on him, with all the chanting and the warrior eerie stuff.”

The idea of the Prince coming over was bounced around since the exhibition, but Mr Tipoti didn't think much of it until it seemed to become a very real possibility, by the middle of last year.

“Then next thing I know the film crew contact me and it's very quickly became a reality. A delegation of the Prince and the film crew came out to Badu and sat with the Council of Elders and PBC Board who all gave it a green light, then everything happened so fast.”

TSIRC Councillor for Badu Laurie Nona took the opportunity to highlight the impacts of climate change in the region.

“I presented the Prince with the effects of climate change that impacts not just Badu, but the whole region, including tidal rises, erosion, the impacts of the heat and warming of the seas,” Cr Nona said.

“We're getting jellyfish up here now like blue bottle as well lots different mites and diseases that weren't here before.

“The water is getting really hot which impacts the coral and fish, and also migratory birds are now not migrating on time.

“I want to capitalise on his position in a global sense and the fact he sees the importance of addressing global warming and anything to do with environmental issues and that he is an advocate for this, so that's a huge opportunity and important to us as a region.

“It's the only honest thing I can go by, the actual effects we see as islanders living and our life experience here, that the wider community of Australia or the globe that they can't see.

“For them when its a hot day they just go to a shopping centre or arcade and get in the aircon, so global warming is not a concern for them, but to be put on the coalface like here on Badu where this film can go into the minds of many people is really important.

“Through the ranger program, they are giving me updates where to coral close to us affected with coral bleaching, including Dollar Reef, and reefs One, Two and Three, and the Prince will be visiting some of those reefs.

“My focus is not Badu, it is regional, I'm speaking for places like Poruma where they need a seawall to save their community, and all those lowing islands, Saibai has a seawall, Boigu is next, Poruma's after that. This is real for us, global warming is real for us.

“Saibai never needed a seawall in the past with the high tides at the end of the year, but now the crocodiles and fish are coming under the houses.

“By talking about this on Badu we can get the voices of Saibai, Boigu, Poruma, Yorke, and all these islands there too, what we are all dealing with is a product of global warming,” Cr Nona said.

The Prince and his delegation enjoyed a community feasting last night and visited the Badu Arts Centre, then tomorrow he will go out snorkelling on the reef.

A full feature of the visit will appear in next week's edition.