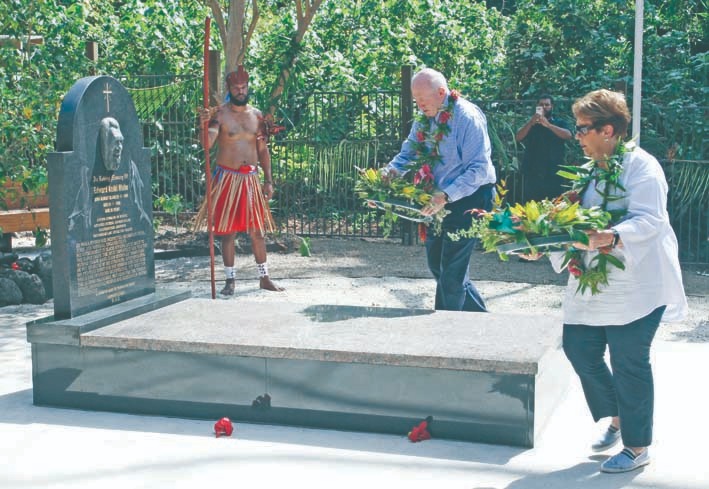 THE Governor General, Sir Peter Cosgrove visited the Torres Strait last week, and after laying a wreath at Eddie Koiki Mabo's grave on Mer stated it was a “right of passage” he thought every future Prime Minister and Governor General should take.

Sir Cosgrove travelled throughout the region from August 9-11 in an Australian Army chinook helicopter, where he visited Thursday Island Tagai State Collage and Tagai TAFE, Thursday Island hospital, Mer Island and Badu Island and even took time to have lunch at Kazu Pearl Farm on Friday Island.

While Sir Cosgrove and his wife Lady Cosgrove were warmly welcomed to the region, local leaders took the opportunity to highlight some of the struggles and issues Torres Strait Islanders endure.

In his Welcome to Country, Milton Savage talked of the plight of the Kaurareg after European arrival, Torres Shire Mayor Vonda Malone at a welcoming ceremony at the Gab Titui Cultural Centre emphasised gap in health Indigenous Australians suffer compared to the rest of the country, TSRA Chair Napau Pedro Stephen mentioned strategic importance of the region, and TSRIC Councillor for Badu Laurie Nona mentioned the need for not only constitutional recognition for First Australians but also the need for Torres Strait Islanders to be recognised as a distinct race different form mainland Australia Aborigines.

At Eddie Mabo's grave on mer, Sir Cosgrove said: “We stand at the last resting place of a very great man. A man who changed the modern history of Australia in a very, very important way... sailors from around the world discovered a new place in turns of the western world and declared to terra nullius.

“The effect of that was, if you saw the land and occupied the land you owned the land.

“It was a self-serving attitude and policy, but it was understandable given the culture of the times,” Sir Cosgrove said.

“It took such a long time hundreds of years before that attitude, that falsity was corrected, but it didn't come naturally to Australia of the day.

“It was through the persistence of a number of people, but nobody greater than Mr Eddie Mabo to correct that misapprehension.

“That struggle took place even though that man was struggling towards the end and sadly he did not live to witness that High Court decision that said effectively that there was a fact of native title and that terra nullius was not a satisfactory, persuasive policy ever more.

“Eddie Mabo inspires us all... he lies here for eternity but his memory and his example will be an inspiration to all Australians, First Australians and the rest of us.