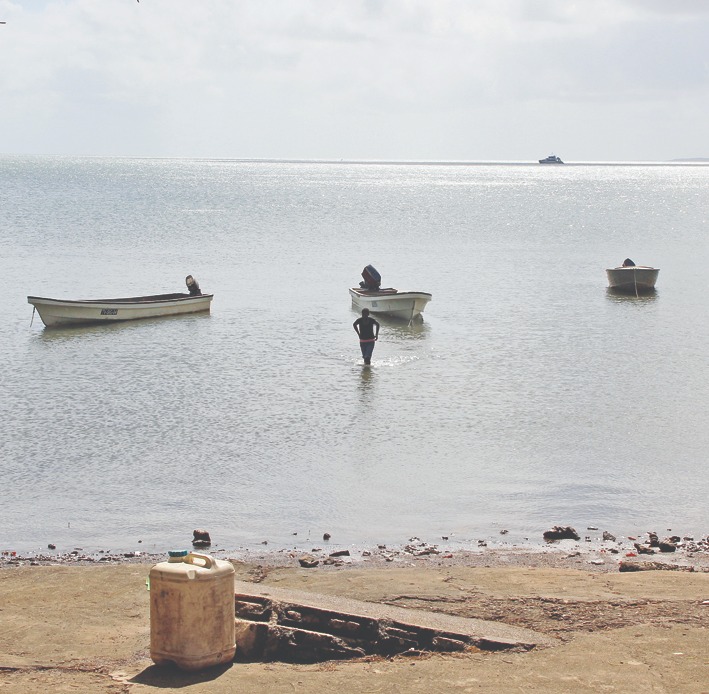 THE illegal arrival of five Chinese nationals to Saibai on August 20, facilitated by people smugglers, is both a timely reminder of how porous our northern border is, and that immigration and border protection minister Peter Dutton was once again not quite telling the truth on August 28 when he declared "we've not had a successful boat now in well over 1,000 days."

“No, that's not the case, we've had boats coming in," Cr Gela said.

Australian Border Force (ABF) was unable to, or would not, explain to Torres News how the arrival of the five Chinese

on Saibai last week was not considered a breach of Operation Sovereign Borders and, hence, making Minister Dutton's statement

However, a spokesperson for Border Force did confirm to Torres News that: "the ABF located and detained six Chinese nationals who were attempting to illegally enter Australia", and that "five of the men have been returned to China."

"Two men - one of the Chinese nationals and a Papuan New Guinea national - were arrested and charged with people smuggling.

They have appeared in court and been remanded in custody," the spokesperson said.

ABF also would not say if the five repatriated men were seeking asylum in Australia?

and were charged with aggravated people smuggling, contrary to Section 233C.1 of the Migration Act.

Minister Dutton made his '1000 boat free days' claim on August 28 on John Laws' Radio 2SM show, and it's not the first time

this year he made this claim, issuing a similar statement on April 23 this year.

It is a claim he has made several times since taking on the ministerial role from Scott Morrison.

It appears that Mr Dutton is only recognising the last boat arrival as a vessel containing 157 mostly Tamil asylum seekers from India that was intercepted by Australian authorities 27 kilometres from Christmas
Island, on July 7, 2014.
The government at the time refused to confirm the existence, location, or status of the boat, until the High Court placed an
injunction on any attempt to return the passengers to Sri Lanka.
However Torres News reported on three asylum seekers of Pakistani and Somali decent reaching Saibai in September 2014.
The last time Torres News reported an asylum seeker reaching Saibai was on August 4 last year when a Central African man was
apprehended trying to sign up for work on a community project.
No doubt there have been other arrivals in the region that has gone unreported with an ABF spokesperson previously telling Torres News: “The Department does not report cohort numbers smaller than five.”
So does the Australian Government not consider four or less asylum seekers arriving by boat as a breach of Operation Sovereign
Borders, and if so why is the August 20 arrival not recorded as a breach?
Cr Gela said: “There’s been a lot of shuffling in regards to the department in creating this new supposedly super model,
department of Homeland Security, and while there’s a lot of debate and controversy around that, while this is all happening, we still have boats entering into Torres Strait.
So the focus needs to be looking at frontline services to ensure that this doesn’t happen.”
It is an area PNG Assistant Police Commissioner Border Divisional Command Donald Yamasombi described in December last year as
rife with illegal activities, including people smuggling.
He made the comments just days after a PNG man was charged with attempting to smuggle four Pakistani men to the Torres Strait
after a seven month joint operation between ABF and PNG authorities.
ABF Commissioner Roman Quaeldvlieg, on January 13 this year, dismissed Commissioner Yamasombi’s claims. But three
days later, PNG’s The National newspaper reported South Fly police commander Inspector Soiwa Ricker as saying: “Foreigners are
coming across the PNG-Indonesian border to go across the PNG Australia border to the Torres Strait,” and “... are also coming from Port Moresby to Daru to go over to the Torres Strait.”
Cr Gela said this recent arrival again highlighted the need of a multi-agency building on Saibai that can hold ABF, Australian
Federal Police and other agencies to properly deal with the border.
“I spoke to Dutton in regards to the importance of looking at a joint facility that will be able to accommodate the authorities that
have the mandate and obligation to deal with the surveillance of the border and for processing and what not,” Cr Gela said.
“Whilst he was attentive, it was almost like, that from the departmental perspective, the new vessels being fabricated are sufficient, but in actual fact we all know they’re not.”
The new large and bulky Cape Class vessels, while being state of the art, lack the ability to venture too far out of established shipping routes due to the many shallow reefs and unsurveyed waters in the region.
“The big vessels are a shared commodity between us and the Gulf as well. It’s not like they stay here 24/7 and that’s a massive area to patrol, so there needs to be a little bit more resources thrown in this area,” Cr Gela said.
In May 2014 then Minister of Immigration Scott Morrison came to the Torres Strait and promised three new tactical speed boats
for the region that could monitor shallow water areas.

They are boats that have yet to materialise and Morrison’s 2014 promise appeared to be nothing more than window dressing for his announcement of the newly formed ABF a couple weeks later.
The three speedboats is something Torres News has enquired about to Member for Leichhardt Warren Entsch, former Prime Minister Tony Abbott and ABF. After persistent inquires ABF told Torres News in December last year that it will now be two speedboats, not three, and that they would be ready early this year, but they have still yet to hit the water.