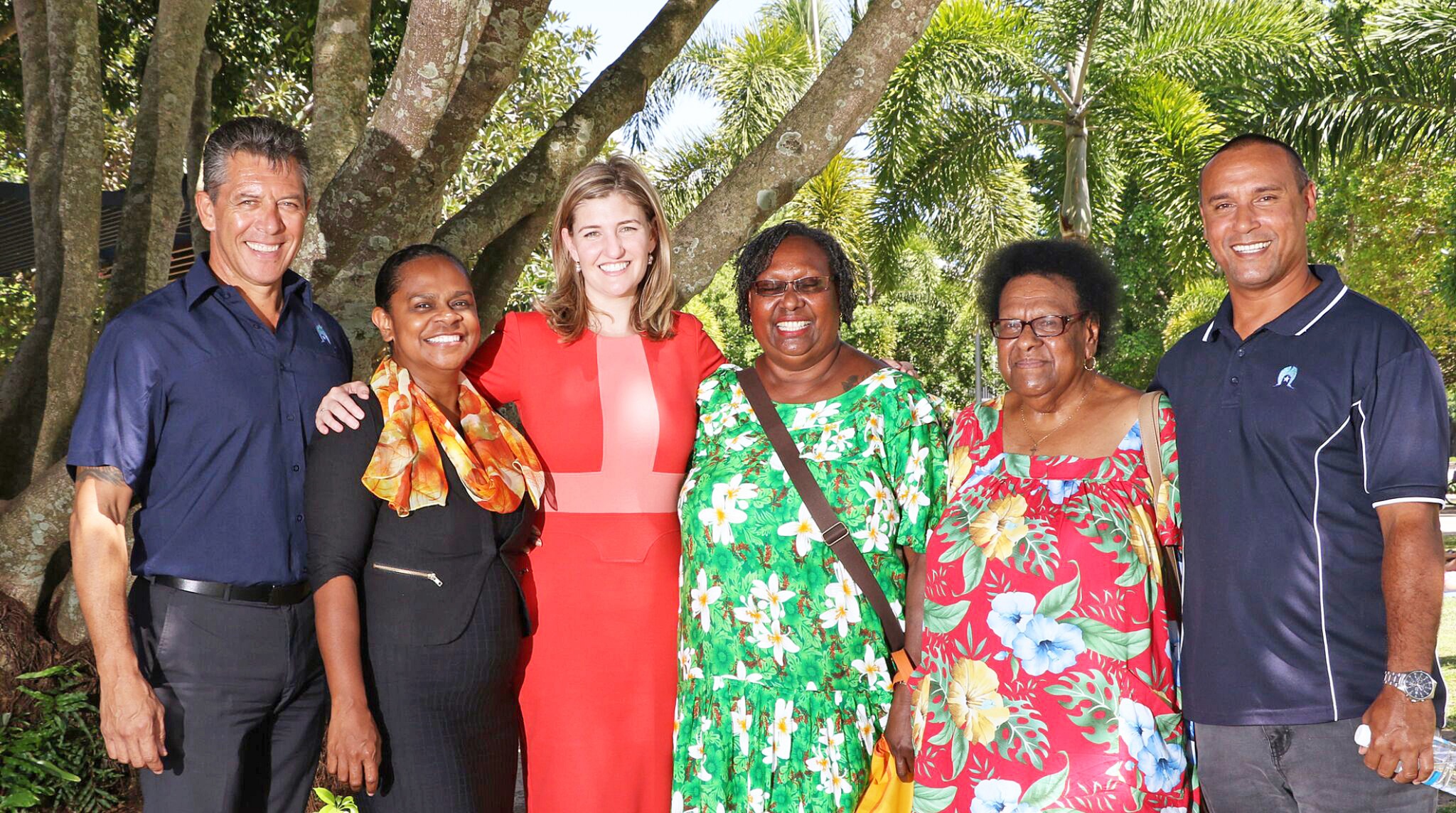 Community leaders say Ailan adoption should have been recognised before election

for traditional or ‘Ailan’ adoption has been used as an election pledge, rather than something resolved in the last term of government.

While supporting the move, the community leaders’ disappointment stems from the fact that an issue, about which they have been lobbying for decades, has become part of an election commitment.
TSIRC Mayor Fred Gela said: “This is certainly a way of winning votes, but, sadly, I hate to say this, this could have been resolved well and truly before the election. Sadly, it has come to this, if this is what it will take then that’s something that we have to wear, which is sad.
“This matter has been on (Premier) Annastacia’s (Palaszczuk) lap for sign off for quite sometime; the government better be fair-dinkum about it, we are well and truly way past the consultative phase; that’s been well and truly exhausted; it’s time to act.”

Torres Shire Mayor Vonda Malone said: “Whilst I commend the Palaszczuk Government for this, I do think it should not be part
of an election commitment.
“The government should have considered this prior to the election; it has been with the government for some time, and they are
using a sensitive issue for people, community and for our children.
“It would have been better to have this put forward at a more appropriate time, as opposed as to during an election process.”
An age-old custom, members of the Torres Strait Islander community have been struggling for decades to get Ailan Adoption recognised by the law.
This lack of recognition has created acute hardship for many families where children, unable to get birth certificates, miss
out on schooling, health care and employment opportunities, children are unable to get high school certificates, driver’s licences
or passports, or open bank accounts.
It also creates problems in settling estates.
Ignoring this issue by successive governments since the 1990’s has led to inter-generational suffering and hardship.
Despite support within the Palaszczuk Government, the
push to get legal recognition came to a dead end at the Premier’s Offi ce for most of the year and something for which Independent member for Cook Billy Gordon had lobbied the government.
“I thought it was a bit cheap, this issue is beyond a election promise, it’s something that should have been done years ago and
shouldn’t be conditional on winning votes,” Mr Gordon said.
“It shouldn’t be election promise but it should be done because its the right thing to do, it’s a cultural right that needs to be recognised.
“I think this stinks to high heaven, if they lose the election then it’s all for nought.”
The Working Party of the Kupai Omasker Torres Strait Islander Child Rearing Practices, has been lobbying successive state  governments for legal recognition since the 1990’s.
Chair of the organisation Ivy Trevallion said: “I am so excited, this is the first commitment I’ve heard from the government, this
is something we have never had before.
“This is a political commitment that we will get something out of, for what we have been fighting for.
“This will let people have their adoption recognised, to be even able to get a birth certificate, it will give people options and better choices in their lives.
“This is for our children and our children’s children, that’s what this is all about.
“This is 30 years’ work, now a political party is making it their platform, they are committed to this now.”
Communities Minister and Ministerial Champion for the Torres Strait Shannon Fentiman said: “These practices have meant generations of loving, caring homes but these extended family relationships have not been fully recognised by Australian law in the same way as Western Adoption.”
“This has meant Torres Strait Islander children being cared for by traditional adoptive parents have been unable to do things we take for granted, such as have a passport in their own name.
“This will be an historic piece of legislation that will ensure Torres Strait Islander children and adults who have been part of this traditional family structure can have their legal identity, including their birth certificate, match their cultural identity.”
Ms Fentiman said Labor’s candidate for Cook, Cynthia Lui, had been a passionate advocate for legal recognition and had lobbied for
reform.
“Cynthia Lui has been a strong and consistent advocate for the work of the Working Party that was formed as far back as 1990
to push for recognition,” Ms Fentiman said.
Ms Lui, who if elected will be the first Torres Strait Islander to sit in the Queensland Parliament, said several governments had considered legal recognition but the Palaszczuk Government would actually deliver.
“Traditional adoption, while similar in outcomes for families and children, is not based on a Western understanding of adoption
and, since 1985 when the then Queensland Government determined that this practice was beyond the scope of the Queensland’s
existing adoptions laws, families have been left in legal limbo,” Ms Lui said.
“Torres Strait Islanders have long sought legal recognition of the outcomes they are achieving for children and families and we
will provide that recognition.
“If elected, I will be incredibly proud to be part of a Labor Government that provides legal recognition for this practice that has
been part of Islander culture since time immemorial.”
“There would not be a Torres Strait Islander family in Queensland that is not touched in some way by the continued use of traditional adoption.
“It will be a proud moment as a Torres Strait Islander woman to vote to pass this legislation in the Parliament.”
The legislation to recognise traditional adoption will be developed in close consultation with Queensland’s Torres Strait Islander
community and an eminent person will be appointed to help that process.
Minister for Aboriginal and Torres Strait Islander Partnerships Mark Furner said he was proud to be part of a government that would
make this change.
“On becoming Minister for Aboriginal and Torres Strait Islander Partnerships, I quickly became aware of traditional adoption and its
precious place in the lives of the people of the Torres Strait.
“As Minister, I am extremely proud to serve in a government prepared to show such care and respect for the cultural customs of
these important and valued Queenslanders.”
Legal recognition of traditional adoptions will be based on three key principles:

• Consent of the birth parents;
• Suitability of adoptive parents; and
• The rights and best interest of the child throughout their life.

The Palaszczuk Government will set aside $1 million to cover the implementation of this legislation.
Cr Gela said the government “entertained numerous consultative processes on this, and, as I understand it, they have been stuck on the word ‘gifting’.
“I think it’s how they’re gone about interpreting some of the conversation that they’ve had.
“It is what it is, it’s Ailan
adoption, it’s not gifting. “It’s sad that it’s come to an election pledge to ensure that we can gain this outcome.
“Many instrumental and vocal Elders have been involved in this conversation, and sadly they’ve passed on now.
“There are families that have broken apart as a result of this, family members that are living testimonies of this practice have lost out on inheritance.
“The other matter they’ve been stuck on, which is why it hasn’t been signed off, was the concern around how do you deal with children that have come into care or custody under this Ailan adoption process, but have been forcibly removed from their families.
“What I have articulated is that there are key stakeholders and there are processes where individuals could be interviewed on how they can best roll this out and how to deal with this highly sensitive issue.
“This certainly a topic that strikes at the very core of Indigenous people, whether you are in the Cape or whether you are in the
Torres.”
Cr Gela said he will talking with LNP candidate for Penny Johnson to see their position on Ailan adoption.
Torres News was unable to reach Ms Johnson comment.