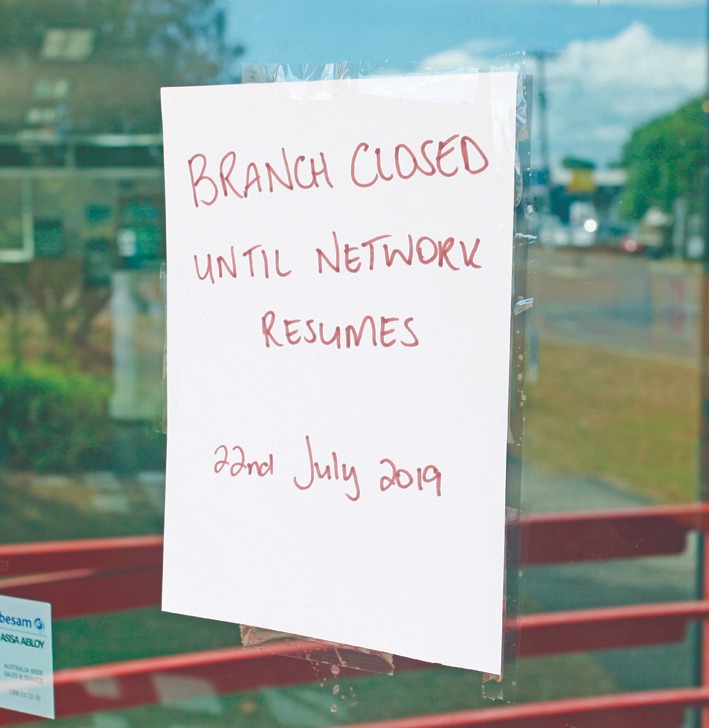 THE CAPE and Torres Strait were disconnected from the rest of the world earlier this week for two days when fire damaged lines north of Coen leaving thousands without access to internet, mobile or fixed line phones.

Calling 000 or the SOS number on mobile didn't work and even banks, businesses and government agencies had to shut down this Monday.

Torres Shire Council Mayor Vonda Malone was critical of the drop out, telling Torres News: “The recent event demonstrated once again that our communities are very vulnerable and totally reliant on a communication system that has no backup.”

“This poor standard of service is not warranted.”

With phones and online communication and EFTPOS down, residents were effectively cut-off.

Some 80km south of Coen, near Yarraden at around 11:30am Sunday July 21, Telstra’s fibre-optic cable, that had been previously eroded by flood erosion, was damaged by bushfire - cutting off the region's lifeline to the outside world.

Due to the remote location of the break, service did not resume until after 7pm on Monday July 22.

Cr Malone said: “In this era of communication and technological advancement we still have a situation that thousands of our people across a vast and remote region as well as our businesses are provided with telecommunication services through a single cable which is susceptible to damage.

“It was extremely fortunate that there were no emergency cases during this time, as loss of life due to delayed response was a real possibility.

“Poor telecommunications across the region both Torres Strait and Cape York is a critical public safety issue,” Cr Malone said.

A Thursday Island Hospital spokesperson told Torres News: “The Torres and Cape Hospital and Health Service and local emergency services coordinated their efforts closely during the recent Telstra outage using radio communication and satellite telephones that were unaffected by the outage.”

“As a result, there were no untoward incidents recorded as a result of the outage.

“All our facilities have appropriate back-up communication channels, such as satellite phones, available to deal with such events as the recent Telstra outage, or disaster-related disruptions to normal communications.”

Dalassa Yorkston CEO of Torres Shire Council said: “It's not just our EFTPOS and our food, it's 000, for council it impacts managing our water and managing our sewerage.”

“While we have radio signals what this event really showed was how much we rely on telecommunications, and unless people had a satellite phone they are cut off.

“If you had any emergency, like a heart attack and needed an ambulance or were on a boat that got in trouble without an EPIRB – our telecommunications is everything to us.”

“So I started calling people on Council's satellite phone saying hey we need help up here, we've got no communications, and I managed to contact Warren Entsch at about 5pm Sunday - he was between flights so I was lucky to catch him,” Ms Yorkston said.

Telstra expedited the repairs after Member for Liechhardt Warren Entsch put pressure on the telco.

Mr Entsch’s office spokesperson said: “Warren told them it had to be the number one priority, no excuses, but to their credit they worked through to Monday night to fix it.”

CEQ CEO Ian Copeland said their IBIS supermarkets across the region were all affected by the outage.

“It’s had a significant hit on us,” he said.

“On Thursday Island we were able to provide a redundancy operation without EFTPOS with a limit of $39 per customer, but if you don’t switch it into safe mode before the power goes out you can’t switch it over, so the Outer Islands had no warning and were just down, so we didn’t have a great deal of trading.

“Warren Entsch was pretty good, he called me every hour on the hour from Canberra with updates promising it would be back up before 10pm Monday and he was right on the money,” Mr Copeland said.

Cr Malone said: “We call on Telstra and the Australian Government to provide advice on the options available to ensure telecommunications infrastructure in our region is more resilient, and to explore what alternative services, including emerging technologies, could be put in place to help safeguard against a total loss of communications in the future.”

Ms Yorkston said Council took their concerns of telecommunication vulnerability to the Federal Government in February and State Government in April this year.

“People need to know, we don't have a secondary line – we are reliant on that only conduit coming up the Cape, it's not good enough,” Ms Yorkston said.

A statement by Torres Shire Council about this issue stressed; “that failure in the delivery of efficient and effective telecommunications in our region, serves to undermine both our business efficiency and our connection to the world; a complete travesty in the twenty-first century.”

“Torres Shire Council acknowledges the investment of both Telstra, TSRA and TSIRC regarding recent upgrades aimed at addressing the telecommunication challenges facing Council.

“The provision of these vital services form part of the universal guarantee enshrined in the Telecommunications (Customer Service Guarantee) Standard 2011 ("the CSG Standard"), as amended and issued by the Australian Communications and Media Authority (ACMA).

More recently, following a major outage in November 2018, Council has been experiencing regular disconnections from the Telstra network, with no resolution to date.

“All effort has been taken at this point to rule out any Council-owned infrastructure and investigations are continuing with Telstra.

“In some cases, services are disconnecting up to 10 or more times per day. The impact on our organisation is significant.”