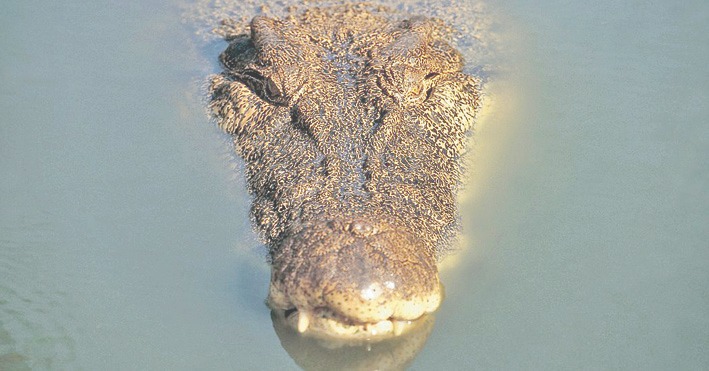 WITH overcast conditions, high tides and still, dark waters, it’s certainly feeling very croccie in the region, and residents have

reported multiple sightings, including a 4m croc running into a car.

The incident occurred last month when a resident was driving on the road at Sadies Beach when a large croc, obviously startled by the noise, ran across the road, hitting the side of the car.

Sources tell Torres News the large amount of animal carcass, including turtle and deer, discarded after kupmurries are the cause for attacting crocs.

“This croc was about 4m and must have been up the hill eating on a deer leg that was lying around, it was lucky it ran into a car and not a person,” the source said.

Another large croc was sighted recently following a dog walking along the beach, which the croc was stalking from the water.

Other croc sightings have been reported at the beach near Torres News office as well as around the back at Rosehill, where two large crocs were spotted near people fishing at the water’s edge.

Conservation and Biodiversity Branch of the Department of Environment and Science about these sightings.

“Council has since been made aware of further croc sightings at Bayo Beach and Sadies Beach, signage has been placed on these

beaches as per standard operating procedures.”

Ms Yorkston said the Department has advised Council that: “At this stage the reports do not appear to contain enough details to

declare these animals as problem crocodiles under the Queensland Crocodile Management Plan, however given the reports relate

Senior Wildlife officers of the Department met with Council’s Compliance Department recently on Thursday Island to assist with further assessment of the sightings and make an accurate risk assessment, prior to the Department making a decision on whether to authorize the utilization of crocodile management measures such as floating crocodile traps.

Ms Yorkston said Torres Shire Council continues to work very closely with the Department of Environment and Science regarding crocodile management for the Shire.

THE public has been urged not to become complacent about reporting crocodile sightings.
A spokesperson for the Department of Environment and Science (DES) said the sighting of the croc at Sadies Beach last month was not reported to them.
“Crocodiles that pose a threat to human safety are targeted for removal under the Queensland Crocodile Management Plan,” the
DES Spokesperson said.
Concerned with reports that food scraps from kupmurrie fire pits have attracted the croc, the DES spokesperson said: “The
public are also advised not to leave food scraps, fish scraps or bait near the water as this will attract crocodiles which have a keen sense of smell.
“Under the Queensland Crocodile Management Plan, Thursday Island is in Zone E (General Management Zone). This means that any crocodile displaying dangerous behaviour is targeted for removal.
“Members of the public are encouraged to report crocodile sightings as soon as possible, by calling 1300 130 372. DES
investigates all reports it receives.”
The DES spokesperson said Thursday Island is known Croc Country and people in the area are reminded to always be Crocwise.